The Nativity Story and America

President Obama went to a Boys and Girls club and spoke of the Nativity:

The birth of baby Jesus, and what he symbolizes for people all around the world is the possibility of peace and people treating each other with respect. And so I just hope that spirit of giving that's so important at Christmas, I hope all of you guys remember that as well. You know, it's not just about getting gifts but it's also doing something for other people. So being nice to your mom and dad and grandma and aunties and showing respect to people -- that's really important too, that's part of the Christmas spirit, don't you think? Do you agree with me?

The Nativity story also figures in a controversial campaign for census participation. From the Leadership Conference on Civil Rights:

[T]here are clear and easy ways to link the Christmas story with census. According to the Gospel According to Luke, Joseph and Mary traveled from Nazareth to Bethlehem, where Jesus was born, because of a Roman census.

LCCREF, in partnership with the National Association of Latino Elected and Appointed Officials (NALEO), NAACP, Asian American Justice Center (AAJC), and the National Congress of American Indians (NCAI), has developed several materials to help, including:

The primary message is: "Joseph and Mary participated in the census…you should too." 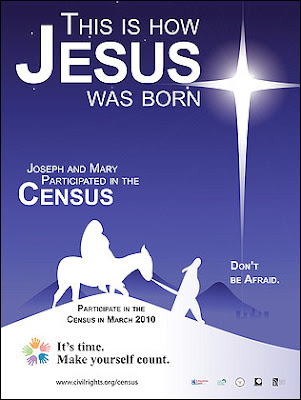