Heading into the 2020 presidential election, three in five Americans favor amending the U.S. Constitution to replace the Electoral College with a popular vote system, marking a six-percentage point uptick since April 2019. This preference for electing the president based on who receives the most votes nationwide is driven by 89% of Democrats and 68% of independents. Far fewer Republicans, 23%, share this view, as 77% of them support keeping the current system in which the candidate with the most votes in the Electoral College wins the election. 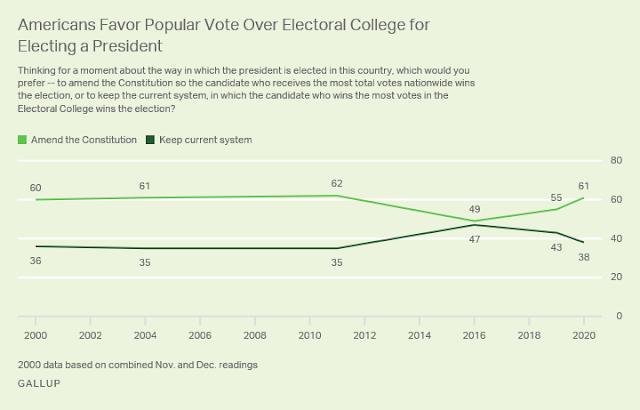 At various times in history, some Americans have expressed admiration for forms of government that contradict the values of the Declaration. In the 1930s, for instance, Walter Duranty of The New York Times whitewashed Stalin's Ukraine famine.
John Broich at Smithsonian Magazine:

Benito Mussolini secured Italy’s premiership by marching on Rome with 30,000 blackshirts in 1922. By 1925 he had declared himself leader for life. While this hardly reflected American values, Mussolini was a darling of the American press, appearing in at least 150 articles from 1925-1932, most neutral, bemused or positive in tone.

The Saturday Evening Post even serialized Il Duce’s autobiography in 1928. Acknowledging that the new “Fascisti movement” was a bit “rough in its methods,” papers ranging from the New York Tribune to the Cleveland Plain Dealer to the Chicago Tribune credited it with saving Italy from the far left and revitalizing its economy. From their perspective, the post-WWI surge of anti-capitalism in Europe was a vastly worse threat than Fascism.

Ironically, while the media acknowledged that Fascism was a new “experiment,” papers like The New York Times commonly credited it with returning turbulent Italy to what it called “normalcy.”

Yet some journalists like Hemingway and journals like the New Yorker rejected the normalization of anti-democratic Mussolini. John Gunther of Harper’s, meanwhile, wrote a razor-sharp account of Mussolini’s masterful manipulation of a U.S. press that couldn’t resist him.

Ethnic Composition of the Electorate

In all 50 states, the share of non-Hispanic White eligible voters declined between 2000 and 2018, with 10 states experiencing double-digit drops in the share of White eligible voters. During that same period, Hispanic voters have come to make up increasingly larger shares of the electorate in every state. These gains are particularly large in the Southwestern U.S., where states like Nevada, California and Texas have seen rapid growth in the Hispanic share of the electorate over an 18-year period.1

These trends are also particularly notable in battleground states – such as Florida and Arizona – that are likely to be crucial in deciding the 2020 election.2 In Florida, two-in-ten eligible voters in 2018 were Hispanic, nearly double the share in 2000. And in the emerging battleground state of Arizona, Hispanic adults made up about one-quarter (24%) of all eligible voters in 2018, up 8 percentage points since 2000.

The ways in which these demographic shifts might shape electoral outcomes are closely linked to the distinct partisan preferences of different racial and ethnic groups. Pew Research Center survey data spanning more than two decades shows that the Democratic Party maintains a wide and long-standing advantage among Black, Hispanic and Asian American registered voters.3 Among White voters, the partisan balance has been generally stable over the past decade, with the Republican Party holding a slight advantage.

The Debt Blows Up 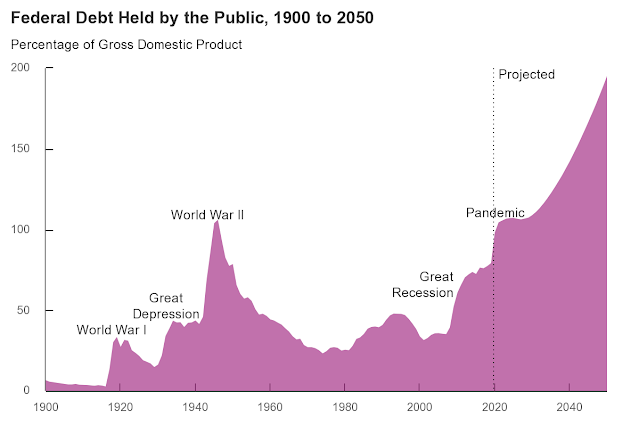 If federal debt as a percentage of GDP continued to rise at the pace that CBO projects it would under current law, in the long term the economy would be affected in two significant ways:

Persistently rising debt as a percentage of GDP would also pose significant risks to the fiscal and economic outlook, although financial markets currently do not reflect those concerns. In particular, that debt path would have these economic and financial effects:
In addition, high and rising debt makes government financing more vulnerable to increases in interest rates because costs to service that debt rise more for a given increase in interest rates when debt is higher than when it is lower. High and rising debt also might cause policymakers to feel restrained from implementing deficit-financed fiscal policy to respond to unforeseen events or for other purposes, such as to promote economic activity or strengthen national defense.

At Fox, Christopher Scalia recalls his father's friendship with Ruth Bader Ginsburg, who died on Friday.

Judge Jeffrey Sutton, one of my father’s former clerks, tells a story about visiting my father at the Supreme Court on what happened to be Justice Ginsburg’s birthday. My dad had bought his old friend two dozen roses for the occasion, and Judge Sutton started teasing him, joking that there was no point to a gift like that when Justice Ginsburg had never sided with him in an important 5-4 case.

My father replied, “Some things are more important than votes.”

The point of this story isn’t that my father or Justice Ginsburg changed their votes to please the other, or that they pulled any punches when writing differing opinions – indeed, they are both known for their strong dissents. The point is that they didn’t let those differing and deeply held convictions undermine their dear friendship.

This has already been one of the most difficult and divisive years in living memory; with Justice Ginsburg’s passing, it will become more so.

Reasonable people of good faith will disagree about important issues. You and your friends will likely hold very strong, very different opinions about what course our country should take and who should lead us there.

A healthy republic requires citizens to debate those issues forcefully and peacefully; a healthy society needs citizens to remember that political disagreement need not turn friends into enemies. My father and Justice Ginsburg mastered this balance. We’ll all need to do the same in the difficult months before us.

Brain Drain on the Hill

This research report comprehensively investigates congressional capacity and governance using publicly available data on long-term trends in legislative branch expenditures and data Furnas and LaPira collected in the 2017 and 2019 Congressional Capacity Surveys (CCS).1 When combined, the CCS is the most comprehensive time-series cross-sectional survey of congressional staffers’ professional backgrounds, career paths, policy views, technical knowledge, substantive expertise, and job experiences ever conducted. We document how the decline in legislative capacity has changed during the era of rising polarization and increasing political party competition. As a consequence, legislative staff in Washington are asked to do more and more, with less and less.

From the V-Dem Institute:

Autocratization – the decline of democratic traits – accelerates in the world:

• For the first time since 2001, autocracies are in the majority: 92 countries – home to 54% of the global population.
• Almost 35% of the world’s population live in autocratizing nations – 2.6 billion people.
• The EU has its first non-democracy as a member: Hungary is now classified as an electoral authoritarian regime.

Major G20 nations and all regions of the world are part of the “third wave of autocratization”:

• Autocratization is affecting Brazil, India, the United States of America, and Turkey, which are major economies with sizeable populations, exercising substantial global military, economic, and political influence.
• Latin America is back to a level last recorded in the early 1990s while Eastern Europe and Central Asia are at post-Soviet Union lows.
• India is on the verge of losing its status as a democracy due to the severely shrinking of space for the media, civil society, and the opposition under Prime Minister Modi’s government.

Attacks on freedom of expression and the media intensify across the world, and the quality of elections begins to deteriorate:

• Attacks on freedom of expression and media freedom are now affecting 31 countries, compared to 19 two years ago.
• The Clean Elections Index fell significantly in 16 nations while improving in only twelve.
• Media censorship and the repression of civil society have intensified in a record 37 countries – eleven more than the 26 states currently affected by severe autocratization. Since these indicators are typically the first to move in a gradual process of autocratization, this development is an early warning signal for what might be yet to come.

• The share of countries with substantial pro-democracy mass protests rose from 27% in 2009 to 44% in 2019.
• Citizens are taking to the streets in order to defend civil liberties and the rule of law, and to fight for clean elections and political freedom.
• The unprecedented degree of mobilization for democracy in light of deepening autocratization is a sign of hope. While pro-autocracy rulers attempt to curtail the space for civil society, millions of citizens have demonstrated their commitment to democracy.

Protesters in democracies resist the dismantling of democracy while their counterparts in
autocracies are demanding more democracy:

• During 2019, citizens in 29 democracies mobilized against autocratization, such as in Bolivia, Poland, and Malawi.
• Citizens staged mass protests in 34 autocracies, among them Algeria, Hong Kong, and Sudan.
• In several cases such as in Sudan, citizens successfully achieved breakthroughs for freedom and democracy.

Democratization continues to progress around the world:

• In 22 countries, pro-democracy mass protests have been followed by substantial democratization during the last ten years.
• Armenia, The Gambia, Sri Lanka, and Tunisia are the four countries achieving the greatest democratic gains.
• Ecuador shows that while autocratization can be turned around, it is difficult to return to a stable democracy