Government anti-poverty programs that have grown to meet the needs of recession victims now serve a record one in six Americans and are continuing to expand.

More than 50 million Americans are on Medicaid, the federal-state program aimed principally at the poor, a survey of state data by USA TODAY shows. That's up at least 17% since the recession began in December 2007.

More than 40 million people get food stamps, an increase of nearly 50% during the economic downturn, according to government data through May. The program has grown steadily for three years

Close to 10 million receive unemployment insurance, nearly four times the number from 2007. Benefits have been extended by Congress eight times beyond the basic 26-week program, enabling the long-term unemployed to get up to 99 weeks of benefits. Caseloads peaked at nearly 12 million in January — "the highest numbers on record," says Christine Riordan of the National Employment Law Project, which advocates for low-wage workers.

More than 4.4 million people are on welfare, an 18% increase during the recession. The program has grown slower than others, causing Brookings Institution expert Ron Haskins to question its effectiveness in the recession. 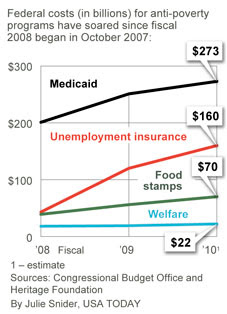 The unemployment-insurance program involves a balance between compassion—providing for persons temporarily without work—and efficiency. The loss in efficiency results partly because the program subsidizes unemployment, causing insufficient job-search, job-acceptance and levels of employment. A further inefficiency concerns the distortions from the increases in taxes required to pay for the program.
...
The peak unemployment rate of 10.1% in October 2009 corresponded to a mean duration of unemployment of 27.2 weeks and a share of long-term unemployment of 36%. The duration of unemployment peaked (thus far) at 35.2 weeks in June 2010, when the share of long-term unemployment in the total reached a remarkable 46.2%. These numbers are way above the ceilings of 21 weeks and 25% share applicable to previous post-World War II recessions. The dramatic expansion of unemployment-insurance eligibility to 99 weeks is almost surely the culprit.