The United States as a Religious Outlier

In our chapter on civic culture (p. 134), we note that United States is unusual for being both rich and religious. New Gallup data confirm the point:

Each of the most religious countries is relatively poor, with a per-capita GDP below $5,000. This reflects the strong relationship between a country's socioeconomic status and the religiosity of its residents. In the world's poorest countries -- those with average per-capita incomes of $2,000 or lower -- the median proportion who say religion is important in their daily lives is 95%. In contrast, the median for the richest countries -- those with average per-capita incomes higher than $25,000 -- is 47%.

Most high-income countries are further down the religiosity spectrum. In 10 countries, no more than 34% of residents say religion is an important part of their daily lives. Six of those are developed countries in Europe and Asia with per-capita incomes greater than $25,000. 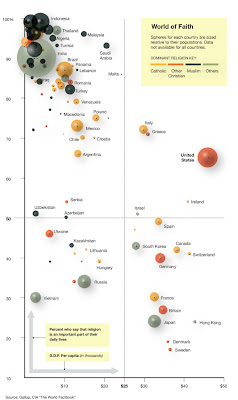