The New York Times "Room for Debate" blog looks at the power of public sector unions:

According to The Wall Street Journal, the American Federation of State, County and Municipal Employees is now the largest outside spender in the 2010 political season, turning on the spigot to help the Democrats in the last weeks before the election. The response follows Republican and Tea Party attacks on AFSCME and other public sector unions, which have been put on the defensive amid popular anger about government spending and stories about big pension payouts.

How much does support from public sector unions help or hurt Democratic candidates this year? The party benefits substantially from the unions' financial contributions and get-out-the-vote drives. But favorable views of unions have dropped considerably in the last few years, especially among independent voters.

Dan DiSalvo of CUNY writes at the blog:

The Tea Party and public sector unions oppose each other over the size of American government. The central ideological thrust of the Tea Party is limited government. Adherents seek to reduce government spending, shrink the national debt and keep tax rates low. In contrast, public sector unions have consistently supported higher taxes and more government spending. Unionized public employees provoke the Tea Party’s ire because they are perceived as enjoying privileged positions and wielding political power that far exceeds their numbers.

Despite these sources of conflict, the two forces are mostly engaged in shadow-boxing. Because neither group is evenly distributed across the country, it is often the case that where the Tea Party is strong, public sector unions are weak, and vice versa.

The good news for the Democrats these days is that union members are one voting bloc that continues to strongly back their party’s candidates -- and by a solid margin in our latest national poll, which otherwise finds a double-digit Republican lead in Congressional voting intentions. The bad news is that labor unions have fallen out of favor with the broader public, including independents who will cast the decisive votes in this year’s elections. 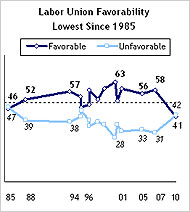