In his 1980 debate with President Carter, Ronald Reagan famously said:

Next Tuesday is Election Day. Next Tuesday all of you will go to the polls, will stand there in the polling place and make a decision. I think when you make that decision, it might be well if you would ask yourself, are you better off than you were four years ago? Is it easier for you to go and buy things in the stores than it was four years ago? Is there more or less unemployment in the country than there was four years ago? Is America as respected throughout the world as it was? Do you feel that our security is as safe, that we're as strong as we were four years ago? And if you answer all of those questions yes, why then, I think your choice is very obvious as to whom you will vote for. If you don't agree, if you don't think that this course that we've been on for the last four years is what you would like to see us follow for the next four, then I could suggest another choice that you have.

In any campaign, of course, it is difficult to establish with certainty who came up with which language. But there is evidence that the famous lines may have originated with Newt Gingrich. In an August 26, 1980 memo (see the full text at the bottom, click to enlarge) to Reagan advisers Rep. Tom Evans (R-Delaware), Sen. Paul Laxalt (R-Nevada) and Jack Kemp (R- New York), the then-freshman House member wrote:

When Carter in the debate has a nicely sounding statement on the economy or anything else, Reagan should not answer Carter or discuss the details of Carter's statement. Instead, he should look straight into the TV camera and say:
"You measure in your pocketbook whether or not what he's just said has been true these past four years. If your life is better, you should vote for him; he is the President and he's responsible. If your life is worse you should vote against him; he is the President and therefore he's responsible"
...
"Don't take my word. Just look at your own personal life. If you decide that Jimmy Carter's destroying your family budget, if you know that your relatives are unemployed and you worry you might be next, then you owe it to yourself to examine the alternative." 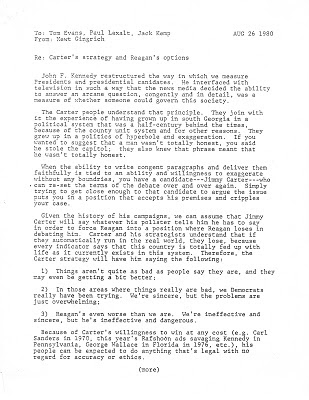 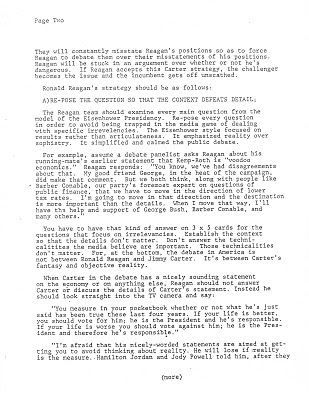 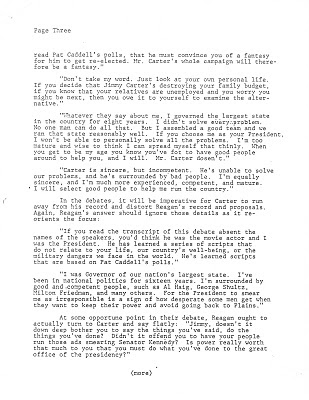 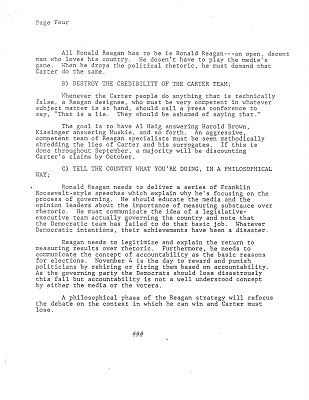