Huntsman, Politics, and the Statue of Liberty

Our chapter on civic culture analyzes patriotic symbols. One of them is the Statue of Liberty.
At Politico, James Hohmann and Elias Groll write:

When Jon Huntsman announces his candidacy for president Tuesday at Liberty State Park in New Jersey, he’ll join a long list of politicians who have found the spot to be an exquisite backdrop for big campaign events.

The park, located in Jersey City, offers a camera shot with dramatic views of the Manhattan skyline and, more important, a photo op with the iconic Statue of Liberty (located in nearby New York Harbor) in the background.

The park is where Jesse Jackson, amid tensions with Jewish voters in 1988, laid a wreath at a monument honoring American soldiers who liberated Jews from World War II German concentration camps. In that same campaign, then-Sen. Bill Bradley (D-N.J.) appeared with Michael Dukakis at the site, delivering his endorsement in an old terminal – now a museum - that had once processed Dukakis’ grandmother after she had arrived from Greece as an immigrant.

Six years later, Bill Clinton found yet another use for the park. He used the venue to deliver a memorable health care speech that turned contentious—at one point he banged the podium so hard in response to protesters that the presidential seal fell off.

Yet Liberty State Park’s most famous political event took place on Labor Day 1980, when Ronald Reagan used it for his general election kickoff.

The site was perfectly suited for his needs at the time. Reagan’s Midwest coordinator, Frank Donatelli, explained that the campaign strategically scheduled lots of events in the Northeast and Midwest to appeal to blue-collar ethnic Catholic voters, many of whom were dissatisfied with Jimmy Carter.

“What better way to reach this voter than the welcoming torch of the Statue of Liberty in the background?” Donatelli said.

Americans have long used the area around the Statue of Liberty as the site for oaths of enlistment and naturalization. In 2000, for instance, Engisn Maria Navarro (left) administered the oath of re-enlistment to Petty Officer 1st Class John Carruthers at the base of the Statue. 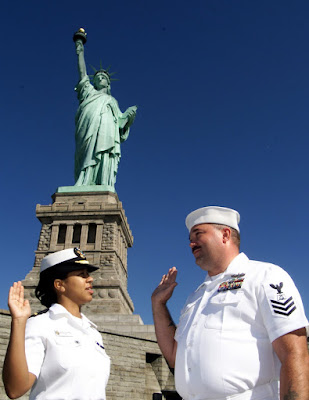