In our chapter on mass media, we feature a picture of journalist Kimberly Dozier, who suffered severe injuries from a bomb blast while covering the war in Iraq.  Now working for AP, she reports:

The State Department has launched a different sort of raid against al-Qaida, engaging in a cat and mouse game to replace anti-American al-Qaida ads on Yemeni tribal websites.

Secretary of State Hillary Rodham Clinton said Wednesday that experts based at the State Department swapped al-Qaida ads on Yemeni websites bragging about killing Americans with ones showing the deadly impact of al-Qaida tactics on Yemenis themselves.

"Our team plastered the same sites with altered versions of the ads that showed the toll al-Qaida attacks have taken on the Yemeni people," Clinton said.

In response, "Extremists are publicly venting their frustration and asking supporters not to believe everything they read on the Internet," she said.

Clinton says the cyber maneuver was launched by an interagency group of specialists, including diplomats, special operators and intelligence analysts, housed at the State Department. Called the Center for Strategic Counterterrorism Communications, its experts patrol the Internet and social media to counter al-Qaida's attempts to recruit new followers.

Other aspects of the online war against terrorism have met with criticism.  Last month, David Saleh Rauf reported at Politico:


Uncle Sam wants to read your tweets and Facebook updates — and, in some cases, already scours your feeds.

Federal agencies have realized they can mine social media for intel to help thwart potential terrorist strikes, keep tabs on domestic protests and better help citizens after a natural disaster.

But privacy groups are clamoring for Congress to intervene, likening it to Big Brother.
That’s a gray area we’re all trying to define,” Rep. Patrick Meehan (R-Pa.), chairman of the House Homeland Security Subcommittee on Counterterrorism and Intelligence, told POLITICO. “The concept that the government would somehow be monitoring and storing inquiries of individual Web activities — many would find that disconcerting.”

It’s a reality in the social-media generation, however. The federal government informally has been combing Twitter, Facebook, YouTube and other social networks for publicly available citizen tidbits for years. Now, several agencies — the FBI and Defense Advanced Research Projects Agency included — are seeking custom tracking technologies to help them scrape social-media sites by computer for certain keywords or trending topics that could help provide them with real-time intelligence.

What keywords could attract the government's attention?  In February, Andrea Stone reported at The Huffington Post:

Ever complain on Facebook that you were feeling "sick?" Told your friends to "watch" a certain TV show? Left a comment on a media website about government "pork?"

If you did any of those things, or tweeted about your recent vacation in "Mexico" or a shopping trip to "Target," the Department of Homeland Security may have noticed.

In the latest revelation of how the federal government is monitoring social media and online news outlets, the Electronic Privacy Information Center has posted online a 2011 Department of Homeland Security manual that includes hundreds of key words (such as those above) and search terms used to detect possible terrorism, unfolding natural disasters and public health threats. The center, a privacy watchdog group, filed a Freedom of Information Act request and then sued to obtain the release of the documents.

The 39-page "Analyst's Desktop Binder" used by the department's National Operations Center includes no-brainer words like ""attack," "epidemic" and "Al Qaeda" (with various spellings). But the list also includes words that can be interpreted as either menacing or innocent depending on the context, such as "exercise," "drill," "wave," "initiative," "relief" and "organization." 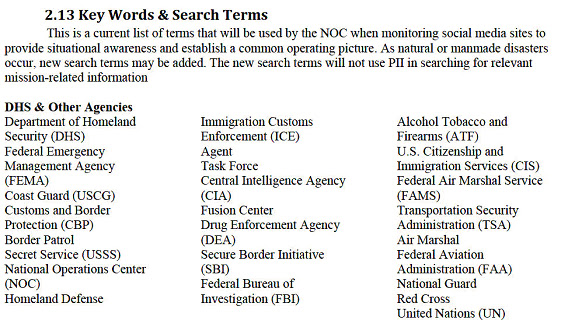