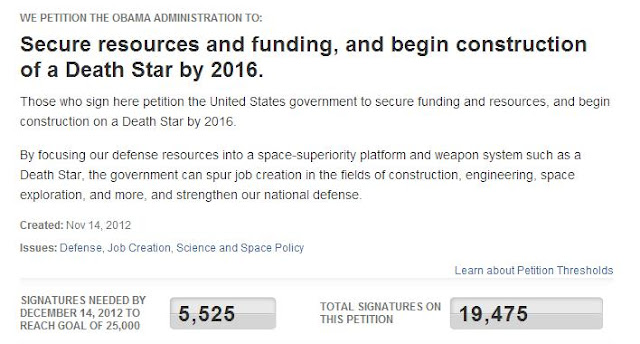 The whimsical petition relates indirectly to a real issue.  On June 28, 2010, The New York Times reported:


The Obama administration on Monday unveiled a space policy that renounces the unilateral stance of the Bush administration and instead emphasizes international cooperation, including the possibility of an arms control treaty that would limit the development of space weapons.

The new space policy explicitly says that Washington will “consider proposals and concepts for arms control measures if they are equitable, effectively verifiable and enhance the national security of the United States and its allies.”

In a New York Times op-ed on March 8 of this year, John R. Bolton and John C. Yoo took exception to administration policy:


OUTER space has become the next frontier for American national security and business. From space, we follow terrorists and intercept their communications, detect foreign military deployments, and monitor a proliferation of unconventional weapons. Our Global Positioning System gives us targeting and tactical advantages, spacecraft create image-rich maps, and satellites beam data around the world.

But instead of advancing American primacy in this realm, the Obama administration has wrongly decided not only to follow a European Union draft “code of conduct” regulating outer space, but also to circumvent the Senate’s central constitutional role in making treaties.

The Obama administration recently declared that America would follow, though not sign, a European Union code of conduct for outer space — a transparent end run around the constitutional requirement that the Senate ratify all treaties. This code, drafted by Europeans who do not bear America’s global responsibilities, restricts military activities in space as well as some peaceful dual-use technologies, like the multistage rockets used to launch commercial satellites.

“When they were academics,” Yoo and Bolton write, “several of [Obama’s] current advisers loudly proclaimed that simply signing treaties without the Senate’s consent helped form binding ‘customary international law.’” Put aside for the moment that the words loudly and binding are merely confections of the writers, the fact is that both international and American common law are built partly of just such broadly embraced practices and indeed always have been.

The militarization of space is not to be laughed off — and the dozens of black-box payloads carried into orbit for the Department of Defense by the space shuttles during their 30-year career attest to how deeply the U.S. is invested in protecting our skies. But making space policy also requires understanding space history — and star warriors like Bolton and Yoo seem to have little grasp of it. For more than 50 years, Presidents of both parties have, in ways big and small, committed themselves to showing the world that our aspirations in space are and will remain peaceful.