The Wall Street Journal reports that the number of "safe" House seats is at a high point.  In some states, Republicans used control of the redistricting process to ensure GOP victories while packing Democratic voters into a smaller number of seats that would be safe for the other side.  More important, the pattern reflects the distribution of the electorate.

[V]oters are dividing themselves geographically more than they did 10 or 20 years ago, political observers say. Americans are now more likely to live in communities where their neighbors share their political views. That steady, decadeslong shift produces more-partisan congressional seats.
"The more self-sorted the electorate is, the easier it is for the people in charge of redistricting to draw more partisan districts," said David Wasserman, who tracks House races for the Cook report. 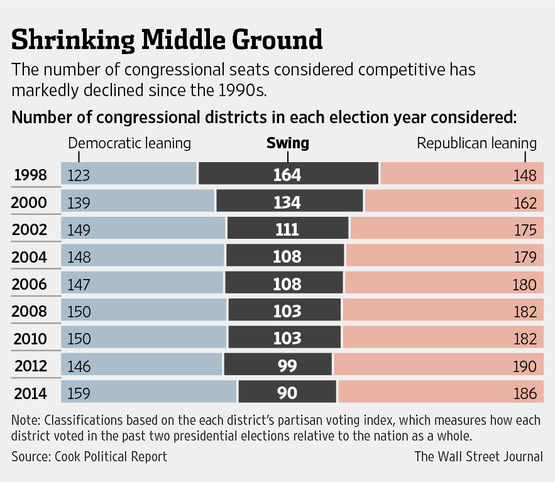 "Unintentional gerrymandering" tends to help the GOP.  That is, the Democratic vote is even more densely concentrated than the GOP vote, often in big cities where Democrats win by huge margins.  In a number of urban precincts in 2012, Mitt Romney literally got zero votes.