The Fnancial Services Institute and the Black Caucus

Many posts have discussed the ways in which interest groups try to influence the government.

Mother Jones reports that a letter that a group of progressive Democrats sent to federal regulators opposing new protections retirement accounts was actually the product of a financial-industry lobbyist.

The Department of Labor, which oversees the federal law setting minimum standards for many retirement plans, would like to require retirement investment advisers to act in the best interest of their customers, as opposed to their own best interest.

But 28 out of the 43 members of the Congressional Black Caucus (CBC)—a group of African American members of Congress that advocates the interests of low-income people and minorities—signed onto a June 14 letter opposing the rule. So did Democratic lawmakers Pedro Pierluisi of Puerto Rico, Tulsi Gabbard of Hawaii, Ed Pastor of Arizona, and Jim Costa of California.

The letter's metadata indicates it was drafted by Robert Lewis, a lobbyist who works for theFinancial Services Institute (FSI), an investment industry trade group.

...
It's not unheard of for lobbyists to ghostwrite letters—or even legislation—for lawmakers. In May, Mother Jones reported on a House bill written almost entirely by a Citigroup lobbyist that would vastly expand the types of risky trades a bank can conduct with taxpayer-backed money.
...
In just the last election cycle, lawmakers who signed the June 14 letter raked in over $88,000 in donations from the securities and investment industry, according to the Center for Responsive Politics. In this case, says Bart Naylor, a financial policy advocate at Public Citizen, "serving ones' own self interest is manifest abidingly, conspicuously, and outrageously."

Without mentioning that its own lobbyist wrote it, FSI has cited the letter in several places.

In a letter to the Securities and Exchange Commission:

On the FSI's own blog. 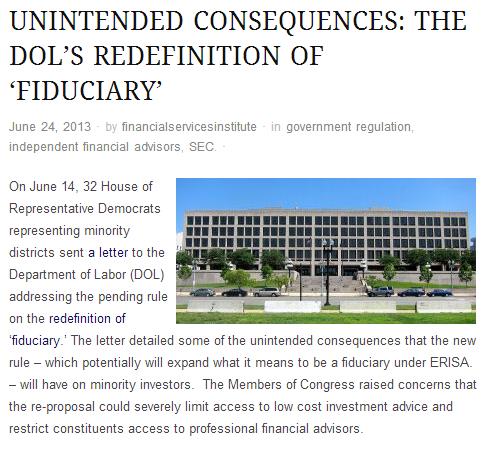