As previous posts have noted, football is an interest group like any other.

Open Secrets reports that individuals and interests affiliated with the NFL have made over $2 million in federal campaign contributions since 1992 and that the NFL has spent over $13 million on lobbying since 1998.

In the 2012 cycle, NFL contributions were thoroughly bipartisan: 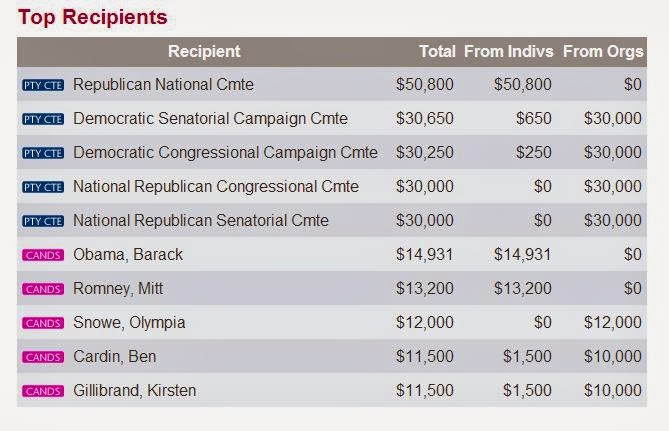 Why on earth would professional football have to worry about politics? US News reports:

Se n. Angus King, I-Maine, is teaming up with Sen. Tom Coburn, R-Okla., in a push to strip the National Football League of its tax-exempt status.

King, a former governor who caucuses with Democrats, is the bill's first co-sponsor and now he's helping recruit more ahead of Sunday's Super Bowl game.

"For every dollar that goes out in a case like this, that's a dollar my constituents have to pay in income taxes," King tells U.S. News. "When I talk to people about the NFL being a non-profit tax-exempt organization they're just astounded."

Several senators seem sympathetic to the bill, King says, and he believes the proposal stands a good shot at become law – although he considers it possible a larger tax policy bill will envelop it.

In a letter to colleagues this week, Coburn and King said the bill would add $10 million a year to federal coffers. Major League Baseball voluntarily abandoned its tax-exempt status in 2007, the letter says, but the PGA Tour and the National Hockey League continue to avail themselves of the tax break.

The PRO Sports Act would specifically bar professional sports organizations with annual revenues of more than $10 million from 501(c)(6) status. That section of the tax code is intended to assist trade groups.