Many posts have discussed the spread of myths and misinformation.

A significant number of Americans believe misinformation about the origins of the coronavirus and the recent presidential election, as well as conspiracy theories like QAnon, according to a new NPR/Ipsos poll.

Forty percent of respondents said they believe the coronavirus was made in a lab in China even though there is no evidence for this. Scientists say the virus was transmitted to humans from another species.

And one-third of Americans believe that voter fraud helped Joe Biden win the 2020 election, despite the fact that courts, election officials and the Justice Department have found no evidence of widespread fraud that could have changed the outcome.

The poll results add to mounting evidence that misinformation is gaining a foothold in American society and that conspiracy theories are going mainstream, especially during the coronavirus pandemic. This has raised concerns about how to get people to believe in a "baseline reality," said Chris Jackson, a pollster with Ipsos. 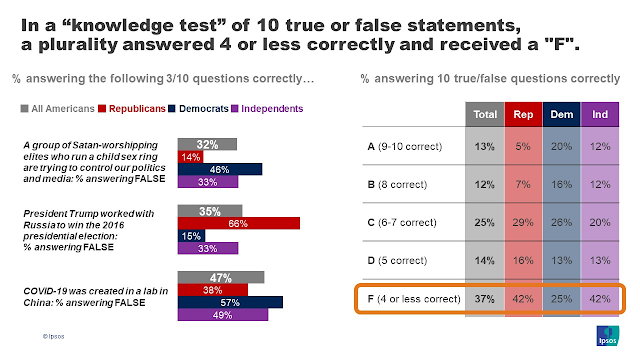