A new exhibit that seeks to explain "the whole story" of the nation's largest Confederate monument, including the history of the Ku Klux Klan there, is coming to Georgia's Stone Mountain Park, the park's board said Monday.

The exhibit will be developed together with "credible and well-established historians," the board said in a news release, "to tell the warts and all history of the Stone Mountain carving," including the 1915 rebirth of the Ku Klux Klan on the mountain "and the 50-years of Klan rallies which followed," until the state bought the mountain and land around it in 1958.

The carving depicts three Confederate leaders of the Civil War on horseback: Jefferson Davis, president of the Confederacy during the Civil War, and Gens. Robert E. Lee and Thomas "Stonewall" Jackson. The figures are 90 feet by 190 feet on a carved oval background that is three acres -- larger than a football field, according to the association.

The monument has long been a flashpoint of debate between those who see it as part of the South's heritage and those for whom it represents White supremacy. It cannot be removed under Georgia law. 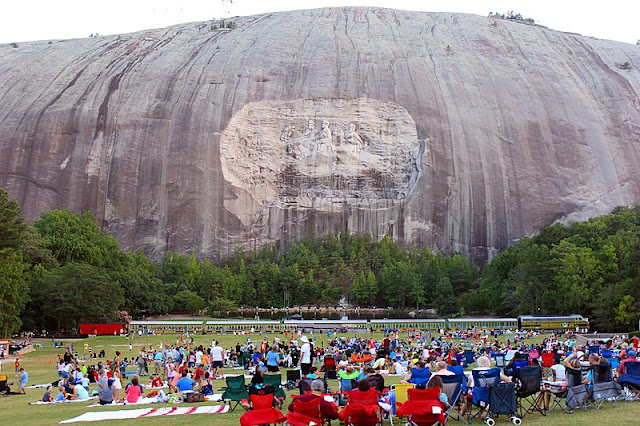 The idea for the sculpture — one of the largest bas-relief carvings in the world — emerged in 1914, portrayed as a massive memorial to the Lost Cause, or the notion that the South was defending more than just slavery in the Civil War.

The effort took decades to complete. It stalled during the Great Depression but picked up new momentum in 1954 as Marvin Griffin, a candidate for governor riding the outcry following the Brown v. Board of Education ruling, promised to uphold segregation and finish the monument. (The park is owned by the state.)

Critics and historians said that racist anger, more than heartache over Confederate bloodshed, fueled the monument’s creation. “They have the wrong people on the mountain,” Mr. Hale said, suggesting that it might have been more accurate to depict segregationist politicians instead of Confederate leaders. “This mountain is about massive resistance to desegregation. It’s not about the Civil War.”