Ad Spending and the Decline of Print

Many posts have discussed the decline of print newspapers.  Underlying that trend is the decline of print advertising.  (The old saying is that the business of for-profit media is selling eyeballs to advertisers.)  In an Axios profile of outgoing Meta president Sheryl Sandberg, Sara Fischer offers a telling graph: 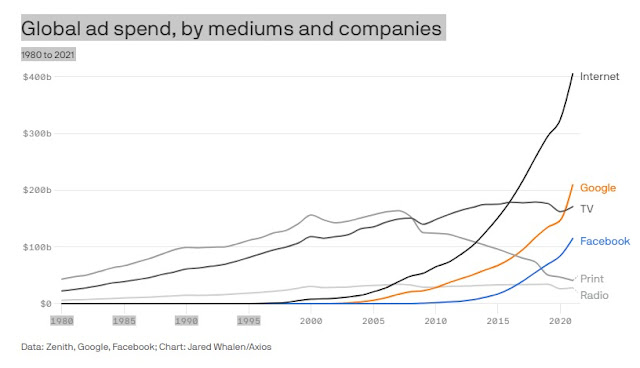 The total combined print and digital circulation for locally focused U.S. daily newspapers in 2020 was 8.3 million for weekday (Monday-Friday) and 15.4 million for Sunday. Each of these numbers is roughly on par with the previous year, but they are still among the lowest reported: Total weekday circulation is down 40% since 2015, the first year available for this analysis. Similarly, total Sunday circulation has fallen 45% since 2015.