Previous posts have dealt with the symbols of American civic culture. One is the Great Seal. 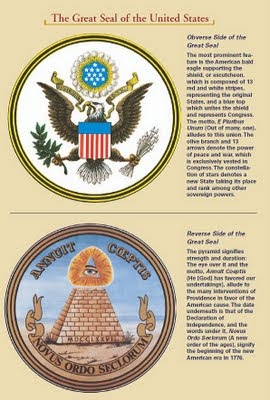 At The Weekly Standard, William Kristol writes of the bin Laden killing:
Justice has been done. It has been done by the exercise of American military power. Sunday night, to put it in terms bin Laden would have understood, Justice rode a strong horse. Or, to change metaphors, there’s a reason Justice is traditionally portrayed in the West as carrying a sword. Justice needs to be able and willing to use the sword. Nor is it an accident that the seal of the United States depicts a bald eagle carrying thirteen arrows as well as an olive branch. American liberal democracy rightly inclines toward the olive branch. But, confident in its principles, well-constituted for energetic (and limited) government, our democracy is also capable of wielding power effectively against our enemies and the enemies of civilization. The British prime minister William Gladstone once said, “The resources of civilization are not yet exhausted.” By finding and killing Osama bin Laden, the United States showed that the resources of civilization are alive and well.
(Image is from a State Department publication about the Great Seal. Click for larger image.)
If you look closely above the eagle's head, as we note in the textbook, you will notice that the field of stars forms a Star of David.
Posted by Pitney at 7:40 AM