One of the boxed features in our book is "Myths and Misinformation," a category that includes fake or misattributed quotations. As a previous post noted, many credit Martin Luther King for saying "The arc of the moral universe is long, but it bends toward justice," even though the line belonged to Theodore Parker. At The Atlantic (h/t Tina Nguyen), Megan McArdle spots another fake King quotation:

Shortly after I posted my piece on feeling curiously un-thrilled about Bin Laden's death, the following quote came across my twitter feed:

"I mourn the loss of thousands of precious lives, but I will not rejoice in the death of one, not even an enemy." - Martin Luther King, Jr

I admire the sentiment. But something about it just strikes me as off, like that great Marx quote about the housing bubble that didn't appear anywhere in Das Kapital.

Owners of capital will stimulate the working class to buy more and more of expensive goods, houses and technology, pushing them to take more and more expensive credits, until their debt becomes unbearable. The unpaid debt will lead to bankruptcy of banks, which will have to be nationalised, and the State will have to take the road which will eventually lead to communism. Karl Marx, Das Kapital, 1867

Like the Marx quote, it's a bit too a propos. What "thousands" would King have been talking about? In which enemy's death was he supposed to be rejoicing?
A quick Google search turns up lots of tweets, all of them from today. Searching Martin Luther King Jr. quote pages for the word "enemy" does not turn up this quote, only things that probably wouldn't go over nearly so well, like "Love is the only force capable of transforming an enemy to a friend." I'm pretty sure that this quote, too, is fake. 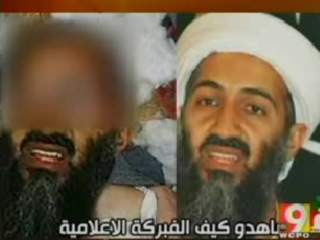 The news isn't yet two days old, but email hoaxes and scams related to Osama bin Laden's death are making their way around the Internet Tuesday.

The biggest hoax among them is the photo to the left. It claims to show bin Laden's dead body, but it is in fact a fake.

The website Scam Sniper shows how it was Photoshopped from the original image on the right. We have blurred the photo due to its graphic nature.

Scam Sniper says any photo of bin Laden's corpse found on Facebook should be considered fake.

We've seen scams using Osama bin Laden's death in other places and of course they made it onto Facebook as well. Here is the first example talking about a video:

When clicking on the link the user is taken to a page on Facebook asking them to copy/paste the code into the browser's address bar so that they can watch the video:

All you do is to help spread the message so don't do this.