In his book on Buckley, Bogus says that  Robert Taft represented a different kind of conservatism.

God and Man at Yale got a scathing review from McGeorge Bundy:


Most remarkable of all, Mr. Buckley, who urges a return to what he considers to be Yale's true religious tradition, at no point says one word of the fact that he himself is an ardent Roman Catholic. In view of the pronounced and well-recognized difference between Protestant and Catholic views on education in America, and in view of Yale's Protestant history, it seems strange for any Roman Catholic to undertake to define the Yale religious tradition (and Yale has thousands of Catholic alumni and friends who would not dream of such a course); it is stranger still for Mr. Buckley to venture his prescription with no word or hint to show his special allegiance.

Whittaker Chambers on the Hiss case:


For the contrast between them and the glittering Hiss forces is about the same as between the glittering French cavalry and the somewhat tattered English bowmen who won at Agincourt.  The inclusive fact about them is that, in contrast to the pro-Hiss rally, most of them, regardless of what they had made of themselves, came from the wrong side of the railroad tracks. ...

No feature of the Hiss case is more obvious, or more troubling as history, than the jagged fissure, which it did not so much open as reveal, between the plain men and women of the nation, and those who affected to act, think, and speak for them.

YAF and The Sharon Statement


New York City mayor John Lindsay was the most disastrous American public official in the second half of the twentieth century. New York City lost a million people during his mayoralty, as people voted with their feet. In addition, Lindsay did damage that went far beyond the city limits.
...
But through his public policies in New York City and his national leadership in the Kerner Report and other venues, Lindsay managed to create a new mindset among a large number of Americans. This frame of mind held that we must expect poor people and black people to commit crime. Their criminality is a justified rebellion against the evils that have been visited upon them. We must expect low-income people and minorities to go on welfare. Lindsay’s welfare commissioner, Mitchell Ginsberg, eliminated almost all eligibility requirements for welfare. He was known as “Come and Get it Ginsberg.” The city administration
made welfare payments to anybody who applied. Lindsay held that increasing welfare rolls was a good thing. It was a sign of government righting a social wrong.
...
Crime boomed, and millions became victims. New York‘s crime rate was increasing even before Lindsay became mayor, but his arrival inaugurated a striking rise in crime, leading to the destruction of large parts of New York City. Places like the South Bronx, Brownsville, and big sections of Harlem were virtually wiped off the map. Buildings were abandoned, vandalized, or torched. Whole blocks emptied out. Middle-class people, lower-middle-class people, working-class people, anybody making a living moved out. The neighborhoods were then patrolled by criminals.


I started reading NR, and it sang to me. They saw it the way I was seeing it: America is essentially good, the war is being fought for serious and valid reasons, the answer to every social ill is not necessarily a social program, when you let a government get too big you threaten your own liberties—-—and God is real as a rock. I was moved, and more. It assuaged a kind of loneliness. Later I found that half the people in the Reagan administration had as their first conservative friend that little magazine.

Bogus, p. 256: "Most members of the conservative movement, however, would continue to see communism as an evil, implacable, and unified force right up to the dissolution of the Soviet Union."  National Review, May 1, 1981: 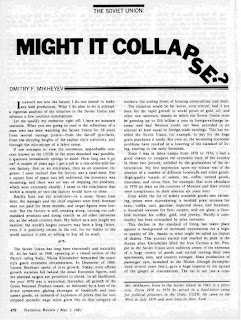