Citizenship in the News

At The Wall Street Journal, Laura Sanders discusses taxation and the renunciation of citizenship:


See a striking interactive graph on the sharp rise in the number of Americans renouncing their citizenship.  And another, static, graph: 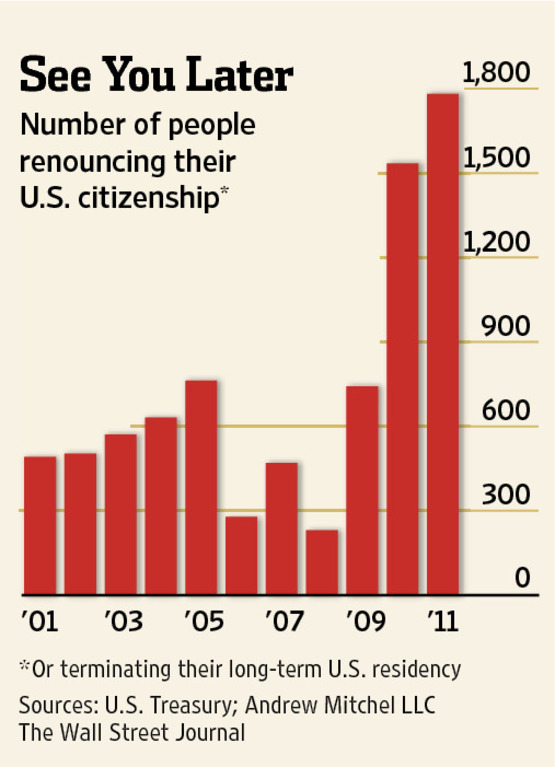 Via USA Today, The Tennesseean reports on naturalization:

"That plays into our ineffective policy on immigration," she said. "It doesn't paint a clear picture of who we are as a nation. There are a lot of myths about who the immigrants are, the face of the immigrant community."

The largest number of naturalized citizens in Tennessee came from India in 2010, the most recent year for detailed U.S. Department of Homeland Security data. Mexico was second, and Egypt third. Most were in professional or management careers.

And at The New York Times, Professor Jacqueline Stevens questions the whole idea of birthright citizenship:


Why does the practice endure? One could point to how birthright ensures loyalty to those born on the same soil and preserves one’s ties to one’s ancestors. But as Aristotle, explaining how the first families proved themselves to be citizens, said: “As a mortar is made by a mortar-maker, so a citizen is made by a citizen-maker.” In other words, citizens are not sprung from the earth or the womb; nationality is not genetic.

Citizens are created by politicians, the citizen-makers. And they are created because the nation, and hence birthright citizenship, exists to alleviate anxieties about death. Belonging to the nation or any other community by birth, including one’s family, sustains fantasies of immortality, as these groups persist after one’s own life has ended. Birthright citizenship, and indeed, the entire body of laws around families and inheritance, embody societies’ collective flight from death.

Libertarians and economists have long questioned the usefulness of national boundaries. In 1984, The Wall Street Journal’s editorial page proposed adding a constitutional amendment: “There shall be open borders.”

For some on the left, the abolition of birthright citizenship evokes the nightmarish prospect of a labor glut in wealthy countries, the global lowering of wages, and capitalism run amok. But greed and corruption have challenged good governance in all ages, not just in the modern capitalist era. Moreover, too many on the left overlook how inheritance laws perpetuate inequality, as well as the disparity in wealth among countries because of restrictions on migration.