On this date in 1962 -- a Sunday, like today -- the general public still did not know that the Cuban Missile Crisis was under way.

At the Council on Foreign Relations, James M. Lindsay writes:


Kennedy began his Sunday by attending 9:00 a.m. Mass at St. Stephen’s Church as he usually did. After returning to the White House, he met with Secretary of State Dean Rusk and Secretary of Defense Robert McNamara and reaffirmed the decision he hadmade the day before to impose a blockade on Cuba. He then met with Gen. Walter Sweeney, the head of the U.S. Air Force Tactical Air Command. The general confirmed what the president had learned in earlier discussions with the ExCom: an air strike wouldreliably destroy at most 90 percent of the Soviet missiles. So when the planes returned home, some working Soviet missiles could still be pointed at the United States.

Kennedy spent his afternoon meeting with the ExCom. The group went line-by-line through the speech that Ted Sorensen had drafted for the president to give to the nation the next night, weighing the political and diplomatic consequences of every sentence. One issue was whether Kennedy should call what the United States was about to do a “blockade” or a “quarantine.” Rusk noted that “The legal meaning of the two words is identical”; stopping ships on the high seas would constitute an act of war under international law regardless of what Washington called it. He preferred calling what the United States was about to do a “quarantine,” however, because it would allow the administration to avoid unflattering comparisons to the blockade that the Soviets had imposed on Berlin in 1948 and 1949. Kennedy accepted Rusk’s point and directed that the term “quarantine” be used.

From the National Security Archive: 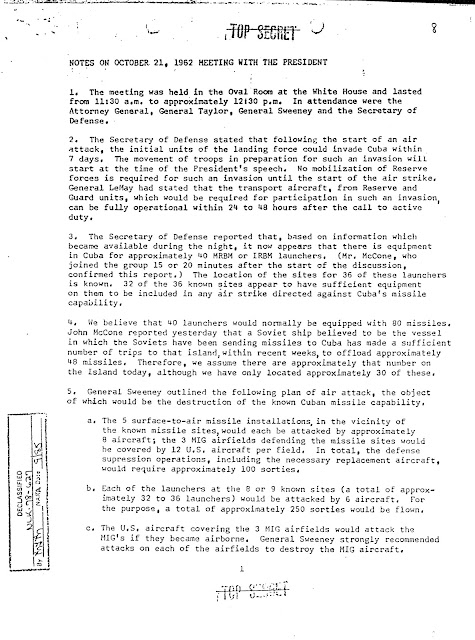 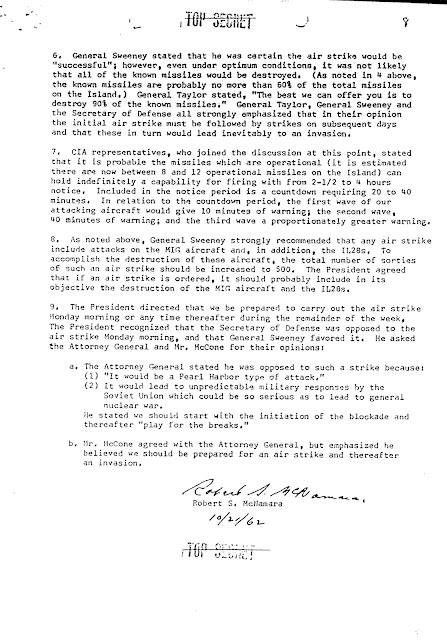