In the 2012 state elections, some blue states got bluer and some red states got redder. The result is unified control, as The New York Times reports:

Though the Nov. 6 election maintained divided government in Washington, the picture is starkly different in capitals from California to Florida: one party will hold the governor’s office and majorities in both legislative chambers in at least 37 states, the largest number in 60 years and a significant jump from even two years ago.
...
Twenty-four states will be controlled by Republicans, including Alaska and Wisconsin, where the party took the State Senate, and North Carolina, where the governorship changed hands. At least 13 states will be Democratic, including Colorado, Minnesota and Oregon, where control of the legislatures shifted, and California, where the already dominant Democrats gained a supermajority in both chambers. (The situation in New York, where the potential for single-party control by the Democrats rests on the makeup of the Senate, is still uncertain.)

Power will be split in, at most, 12 capitals — the fewest, said Tim Storey of the National Conference of State Legislatures, since 1952. 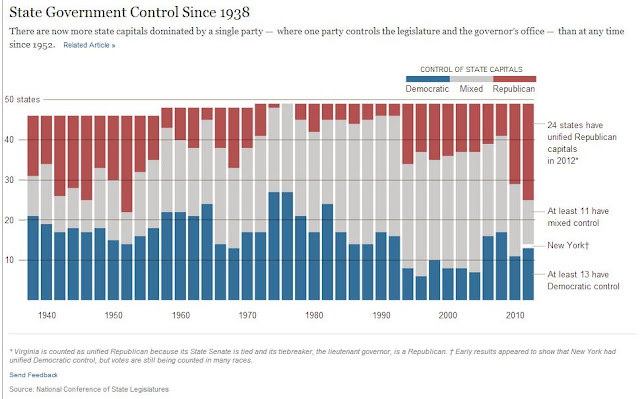