The White House, the Media, Anonymous Sources, and Minders


At today’s White House briefing, press secretary Josh Earnest expressed some displeasure with The Washington Post. Asked about a story in The Post asserting that the White House had specific warnings about the ongoing border crisis involving unaccompanied minors, Earnest ripped, “I’d first point out that you’re asking about a story that’s based entirely on anonymous sources, so that should be reflected in the record.”

As Wemple points out, Earnest's assertion was false:  the story included named sources and a link to a public document.


In the course of debate over sourcing, Earnest remarked that The Post “wasn’t here to defend themselves. They didn’t show up today.”

Barr on that: “As to our chair being empty today – we staff the briefing very consistently. On the rare occasion when we are not there, as was the case today, we cover the briefing remotely.” 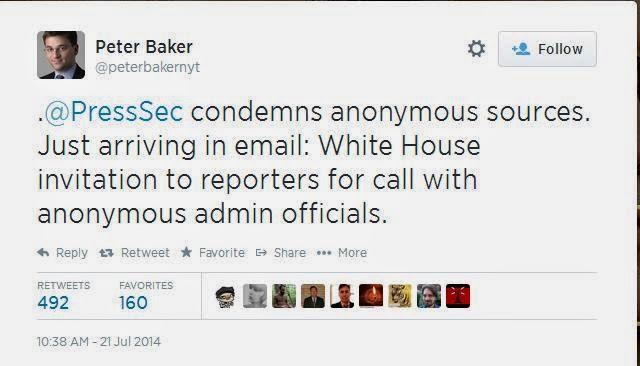 
When NBC News White House reporter Chuck Todd conducts background interviews with government officials these days, he and his source usually aren’t the only ones in the room or on the call. Typically, there’s a third party: A representative of the White House’s press staff monitors the conversation.

Sometimes, the press monitor interjects to clarify a point the official makes. Other times, he or she remains silent. Each time, however, “it feels like having a third wheel on a date,” Todd says. “It’s like having a chaperon.” He adds, “There’s so much precaution now in the way people in power interact with the press.”

The press-minder phenomenon isn’t limited to the White House. Reporters who cover other parts of official Washington, such as Capitol Hill, can usually count on encountering an official escort, turning a one-on-one interview into a one-on-two. The same thing happens irregularly to journalists who interview sports, entertainment and business figures.

One reporter says she beats the minder system by calling officials at home or on their cellphones on weekends. After doing so, she’ll cover her tracks and her source’s by requesting an “official” interview with the person she’s already interviewed. If her request is approved, she and her source will pretend that they haven’t spoken previously.

Other reporters say officials are often happy to have a minder present because it gives them cover in the event they are suspected of leaking information to the news media.