New Book: The Politics of Autism

A number of posts have discussed the politics of autism.  I have a new book on the topic: 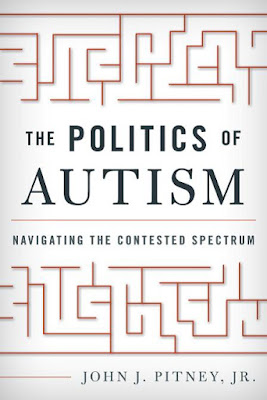 FOR RELEASE AUGUST 2015
Contact Jacqline Barnes 301-459-3366 x5515
jbarnes@rowman.com
“Autism matters to everyone. Pitney leaves his reader understanding why this is true and why solutions have proven elusive. The Politics of Autism expertly maps the complex terrain of policy designed to address society’s challenges attributed to autism and provides a solid foundation from which to move forward.”
—Dana Lee Baker, School of Politics, Philosophy and Public Affairs, Washington State University
In the first book devoted exclusively to the contentious politics of autism, noted political scientist and public policy expert John J. Pitney, Jr., explains how autism has evolved into a heated political issue disputed by scientists, educators, social workers, and families. Nearly everything about autism is subject to debate and struggle, including its measurement and definition. Organizational attempts to deal with autism have resulted in not a single “autism policy,” but a vast array of policies at the federal, state, and local levels, which often leave people with autism and their families frustrated and confused.
Americans with autism are citizens, friends, coworkers, sons, daughters, fathers, and mothers. No longer simply the objects of public policy, they are active participants in current policy debates. Pitney’s fascinating look at how public policy is made and implemented offers networks of concerned parents, educators, and researchers a compass to navigate the current systems and hope for a path towards more regularized and effective policies for America’s autism community.
Features