Goldwater & the Black Vote, Trump and the Hispanic Vote

While he is committed to voting for Trump, McConnell, a Republican from Kentucky, said in an interview with CNN's Jake Tapper on Thursday that the GOP nominee could push Latinos away from the party in a way similar to how black voters distanced themselves from the Republican Party in 1964 when it was led by conservative Barry Goldwater.

Recalling how he supported Democratic president Lyndon Johnson over Goldwater that year, McConnell was asked if he worried Trump could have the same effect on Hispanics, who overwhelmingly view the real estate tycoon unfavorably.

"I do. I do," he said on "The Lead," pointing to Trump's recent scorching criticism of a prominent Republican Latina politician, New Mexico Gov. Susana Martinez.

According to data from the University of Michigan's American National Election Studies, the GOP won an average of 30 percent of the black vote between 1948 and 1960.  From 1964 t 2012, the average was just 5.6 percent. 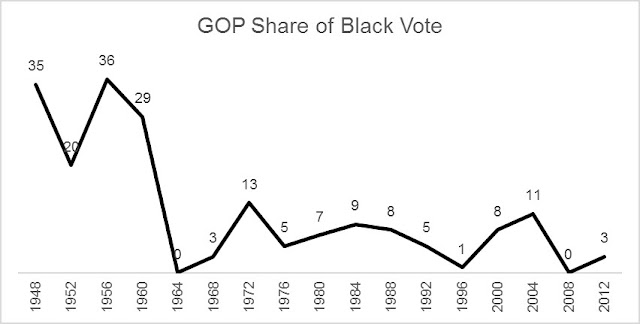