Lying About the Federal Workforce


President Trump on Monday signed an executive order instituting a hiring freeze on all nonmilitary federal employees. At a press briefing, White House press secretary Sean Spicer said that the move “counters the dramatic expansion of the federal workforce in recent years.”

In both raw-number and percentage terms, this is an inaccurate statement. According to numbers from the Bureau of Labor Statistics, there were 2.8 million employees on the federal payroll as of December. The number has risen slightly since May 2014, when there were roughly 2.7 million federal employees (part of the reason may be an accelerated pace of hiring in anticipation of a new presidential administration). That represents an increase of about 3 percent.

By contrast, the total civilian workforce, excluding federal employees, grew by about 4.9 percent over the same period.

From the Office of Personnel Management: 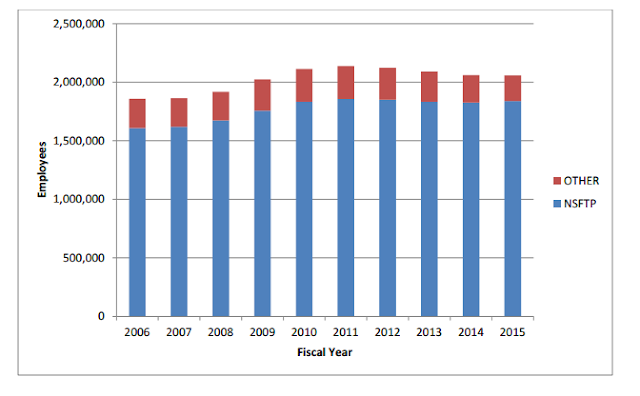 (NSFTP stands for non-seasonal full-time permanent)
Posted by Pitney at 5:39 AM