Pew reports that, at least since the start of the century, partisanship has heavily affected perceptions of economic conditions.


Today, a 57% majority of Republicans and Republican leaners characterize national economic conditions as excellent (10%) or good (47%). Among Democrats, just 30% say the same. At the same time, Democrats are roughly twice as likely as Republicans to describe current conditions as poor (27% vs. 12%).

Throughout much of the Obama administration, Democratic ratings of the economy were considerably more positive than Republican assessments. For instance, as recently as December 2016, just 14% of Republicans said the economy was in excellent or good shape, compared with 46% of Democrats.

This pattern of views of the economy being more positive among those who share the president’s party was also apparent throughout much of George W. Bush’s administration (briefly narrowing at the height of the economic crisis in late 2008 and early 2009, when clear majorities of both Democrats and Republicans rated economic conditions as poor) and at the tail end of the George H.W. Bush administration (when the question was first asked by Gallup). During Bill Clinton’s presidency, Republican and Democratic views tracked one another more closely. 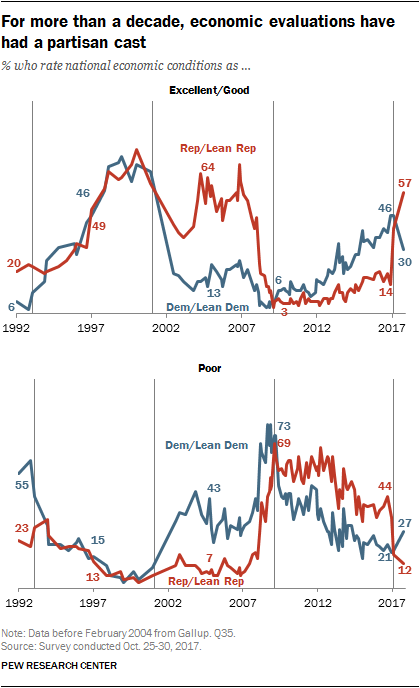