Juliet Eilperin and Lena H. Sun at The Washington Post:

The Trump administration is waging a linguistic battle across official Washington, seeking to shift public perception of key policies by changing the way the federal government talks about climate change, scientific evidence and disadvantaged communities.

The push drew fresh attention after employees at the Department of Health and Human Services were told to avoid certain words — including “vulnerable” “entitlement” and “diversity” — when preparing requests for next year’s budget. But the effort to disappear certain language and replace it with other terms is much broader, sparking resistance from career officials in multiple federal agencies, outside experts and congressional Democrats.

Climate change, for example, has for months presented a linguistic minefield; multiple references to it have been purged repeatedly at the Environmental Protection Agency and the Interior Department. In late summer, the Office of Juvenile Justice and Delinquency Prevention issued a document to employees and contractors bearing a column of words and phrases to be avoided, alongside a column of acceptable alternatives. 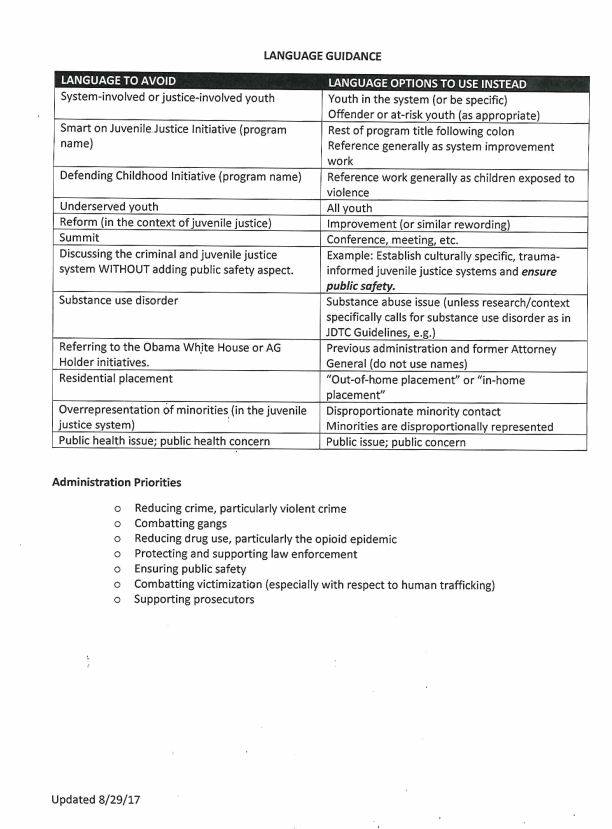 As you know, one of the key points in the GOPAC tapes is that "language matters." In the video "We are a Majority," Language is listed as a key mechanism of control used by a majority party, along with Agenda, Rules, Attitude and Learning. As the tapes have been used in training sessions across the country and mailed to candidates we have heard a plaintive plea: "I wish I could speak like Newt."

That takes years of practice. But, we believe that you could have a significant impact on your campaign and the way you communicate if we help a little. That is why we have created this list of words and phrases.

This list is prepared so that you might have a directory of words to use in writing literature and mail, in preparing speeches, and in producing electronic media. The words and phrases are powerful. Read them. Memorize as many as possible. And remember that like any tool, these words will not help if they are not used.

While the list could be the size of the latest "College Edition" dictionary, we have attempted to keep it small enough to be readily useful yet large enough to be broadly functional. The list is divided into two sections: Optimistic Positive Governing words and phrases to help describe your vision for the future of your community (your message) and Contrasting words to help you clearly define the policies and record of your opponent and the Democratic party.

Please let us know if you have any other suggestions or additions. We would also like to know how you use the list. Call us at GOPAC or write with your suggestions and comments. We may include them in the next tape mailing so that others can benefit from your knowledge and experience.

Optimistic Positive Governing Words
Use the list below to help define your campaign and your vision of public service. These words can help give extra power to your message. In addition, these words help develop the positive side of the contrast you should create with your opponent, giving your community something to vote for!

Contrasting Words
Often we search hard for words to define our opponents. Sometimes we are hesitant to use contrast. Remember that creating a difference helps you. These are powerful words that can create a clear and easily understood contrast. Apply these to the opponent, their record, proposals and their party.