At Brookings, William Frey writes that the previous decade could go down as the first to see an absolute loss in white population.

These new estimates show annual population changes by race and ethnicity between July 2010 and July 2020. They indicate that, for each year since 2016, the nation’s white population dropped in size. Thus, all of U.S. population growth from 2016 to 2020 comes from gains in people of color.

These statistics extend and update a trend revealed in data published last year, and further emphasize why the diversity profile of the U.S. population is rising rapidly. This is especially the case for the nation’s younger population, which experienced the greatest white population losses. The statistics also imply that, as the white population ages and declines further, racial and ethnic diversity will be the hallmark demographic feature of America’s younger generations, including Gen Z and those that follow.

Earlier population estimates have shown that the 2010s decade—especially its later years—was one of historically low population growth. This was the result of declining fertility, increased mortality, and a slowdown in immigration from abroad. The former two trends are especially characteristic of the nation’s white population, who are aging more rapidly than other groups.[2] 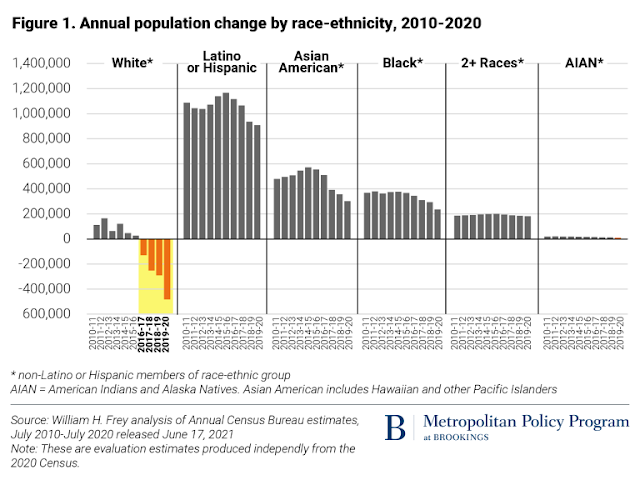