Many posts have discussed issues with survey research.

Joe Lenski: For presidential general elections or midterms, we typically have people at 700 to 1,000 precinct locations. In 2020, we also had people at 200 early voting centers around the country. We interviewed about 30,000 people by telephone before Election Day to identify by mail and early voters. Every survey you saw in 2020 was some mix of these three modes. Seventy percent of the vote in 2020 was early or by mail. So we increased the number of telephone interviews of by-mail voters and increased the number of early voter locations where we interview people in person. The techniques are the same as an exit poll. We interview people right after they cast their ballot, but now it is during the weeks leading up to the election at early voting centers. So in every survey you see some mix of those three modes.

AEI: How does the process of writing the questionnaire unfold?

Sample 2020 Exit Poll Questionnaire Note: The exit pollsters use different questionnaires in different states. This is one of four versions used in Illinois. Source: Edison Research. 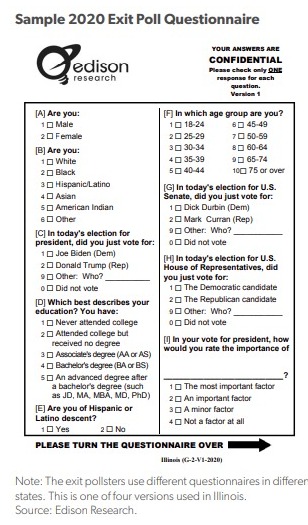