No matter where they are from, who they are, their economic circumstances or educational backgrounds, significant majorities of Black Americans say being Black is extremely or very important to how they think about themselves, with about three-quarters (76%) overall saying so.
A significant share of Black Americans also say that when something happens to Black people in their local communities, across the nation or around the globe, it affects what happens in their own lives, highlighting a sense of connectedness. Black Americans say this even as they have diverse experiences and come from an array of backgrounds.

Even so, Black adults who say being Black is important to their sense of self are more likely than other Black adults to feel connected to other groups of Black people. They are also more likely to feel that what happens to Black people inside and outside the United States affects what happens in their own lives. These findings emerge from an extensive new survey of Black U.S. adults conducted by Pew Research Center 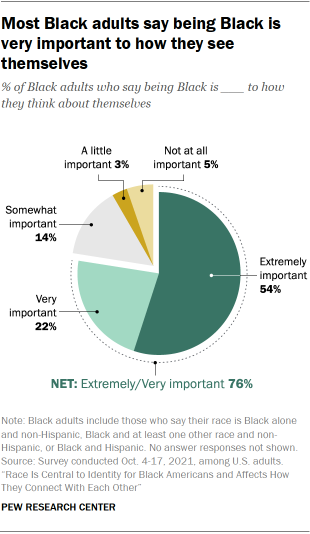