The shooting massacre in Uvalde garnered huge attention on social media in the immediate aftermath of the attack, but it's unclear how long that focus will last.

Why it matters: The attention to the attack shows the country isn't numb to shooting tragedies — it's overwhelmed by them.

Details: Data provided exclusively to Axios by NewsWhip shows a public surge of interest in the immediate aftermath, peaking above even the 2018 shooting at Stoneman Douglas High School in Parkland, Fla.

The interest, measured in social media interactions (likes, shares, comments) on news articles following Parkland, however, was sustained for a much longer period of time, as students who survived the shooting became vocal gun control activists.

The Uvalde tragedy, occurring just 10 days after the deadly shooting in Buffalo, N.Y., came as Americans were already trying to process another shooting tragedy, and provided momentum for a growing debate around gun control and extremism. 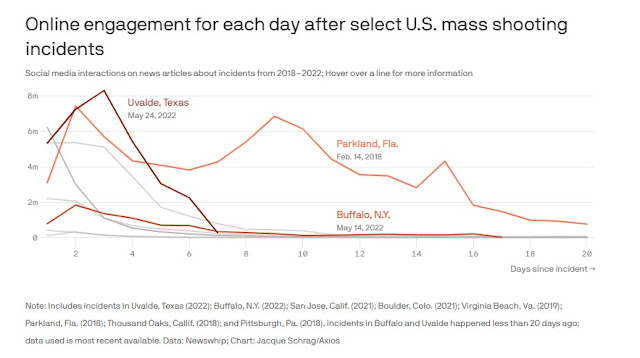