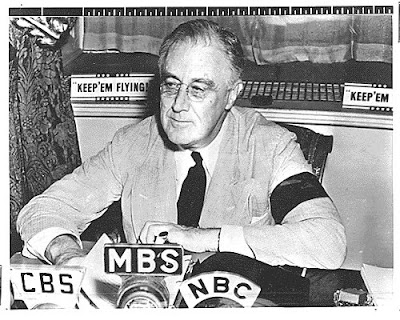 Sixty-eight years ago today, President Franklin Roosevelt gave one his his "fireside chat" speeches on national radio. (You may find full text and audio here.) He reviewed the progress of the Second World War, which at the time was going badly for the United States and its allies. Pearl Harbor was just a couple of months in the past, and the remarkable victory in the Battle of Midway would not happen until June.

This war is a new kind of war. It is different from all other wars of the past, not only in its methods and weapons but also in its geography. It is warfare in terms of every continent, every island, every sea, every air lane in the world.

That is the reason why I have asked you to take out and spread before you a map of the whole earth, and to follow with me the references which I shall make to the world-encircling battle lines of this war. Many questions will, I fear, remain unanswered tonight; but I know you will realize that I cannot cover everything in any one short report to the people.

He then referred to the map to explain calmly why the war was difficult but winnable. He then spoke of trust between the government and the people.

Your Government has unmistakable confidence in your ability to hear the worst, without flinching or losing heart. You must, in turn, have complete confidence that your Government is keeping nothing from you except information that will help the enemy in his attempt to destroy us. In a democracy there is always a solemn pact of truth between Government and the people; but there must also always be a full use of discretion and that word "discretion" applies to the critics of Government, as well.

He laid out three "high purposes" for every American.

1. We shall not stop work for a single day. If any dispute arises we shall keep on working while the dispute is. solved by mediation, conciliation, or arbitration- until the war is won.

2. We shall not demand special gains or special privileges or special advantages for any one group or occupation.

3. We shall give up conveniences and modify the routine of our lives if our country asks us to do so. We will do it cheerfully, remembering that the common enemy seeks to destroy every home and every freedom in every part of our land.

This generation of Americans has come to realize, with a present and personal realization, that there is something larger and more important than the life of any individual or of any individual group- something for which a man will sacrifice, and gladly sacrifice, not only his pleasures, not only his goods, not only his associations with those he loves, but his life itself. In time of crisis when the future is in the balance, we come to understand, with full recognition and devotion, what this Nation is, and what we owe to it.

The speech powerfully illustrates points that we make in the text. As we note in the chapters on the presidency and mass media, radio changed the way in which presidents communicate with the public. Woodrow Wilson, for instance, could not have given such a speech during the First World War because most people did not yet have radios. More important, FDR was assuming that Americans could put patriotism ahead of narrow self-interest. He had often practiced interest-group politics himself, but he thought that people could rise above it, especially in wartime. He knew that there was such a thing as civic virtue.