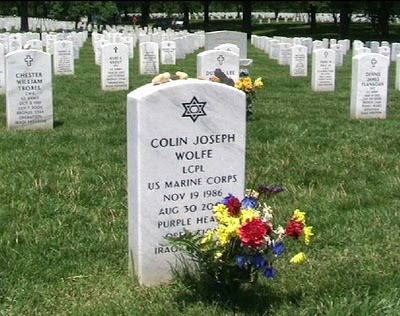 Today we remember that there is more to life than the pursuit of rational self-interest. Self-sacrifice is very real. In the San Bernardino County Sun, James Koren reports on a recruiting batallion headed by Lieutentant Colonel Miguel Howe:

Howe said the economy is just one of the reasons young men and women have been flocking to the armed forces.

"People are not risking their life solely for pay and benefits," he said.

Amanda Salcedo, a San Bernardino resident who graduated from Cajon High School in 2008, said the college money and the job training are nice, but she has other reasons for joining the Navy.

"The job wasn't the reason - it's a plus," said Salcedo, who will head to basic training in Illinois in June. "I want to do something good with my life."

[Andy] Issar, who immigrated to the U.S. from Canada and traces his family roots to India, said he wants to show the rest of the world the kind of opportunity America offers.

"I hope I do get to go to Iraq or Afghanistan," he said. "I feel I'm (the country's) best foot forward. I'd be showing people what this country has done."

This Memorial Day, nearly three-out-of-four Americans (74%) have a favorable opinion of the U.S. military, according to a new Rasmussen Reports national telephone survey. Just 12% hold an unfavorable opinion, and 13% are not sure.

These figures have held steady for the past two years.

Thirty-five percent (35%) of Adults say they have a relative or close friend currently serving our country in Iraq or Afghanistan, down nine points from a year ago.