Prediction of the Presidential Election

Here is my best guess as to what will happen tomorrow in the presidential race.

Popular vote:  Obama squeaks by with 50 percent to Romney's 49 percent, and 1 percent for others. 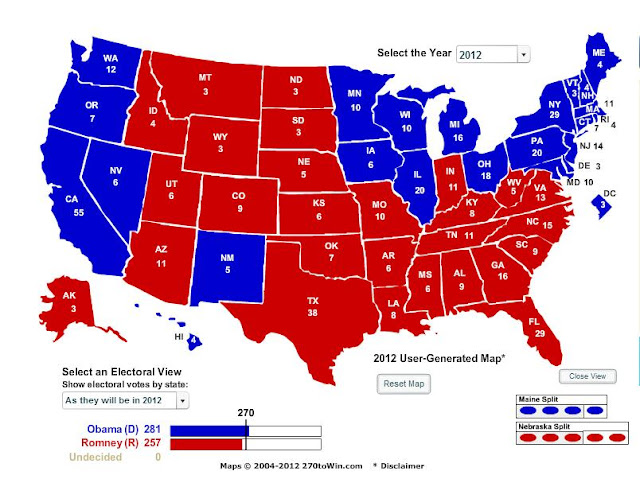 The popular vote should come as no surprise. A very narrow Obama victory is about what most political science models predicted months ago. Outcomes usually hinge on the economy, and though growth remains sluggish, it is just barely great enough to push the president over the finish line. In recent days, moreover, most national polls have shown a shift in the president's direction. Pew gives a slightly larger margin to Obama, but as Nate Silver explained a few months ago, Pew has the largest "house effect" of any of the major polls (in this case, 3.2 percent in favor of Democrats).

The electoral vote prediction relies on polls and other public sources of information. The campaigns may have sources that are telling them something different, but we should discount what they say in public about what they're seeing in private. (And place no stock in the crowds the candidates are drawing.  In 1972, George McGovern got huge crowds at the end -- and then he lost 49 states.) My map generally follows the RealClearPolitics "No Tossup" map, with two exceptions.  In Virginia, the president has a one percent lead in the latest poll.  But that poll is from Marist, which has a 2 percent Democratic house effect, so I'm reckoning that Romney is actually ahead by a point.  In Colorado, the polls put Obama slightly in front, but Republicans seem to have an edge in the early vote, so I give it to Romney.

Here are some big caveats:

The most likely outcome is that Obama wins the popular and electoral vote.  But because of the uncertainties above, other outcomes are within the range of possibility: