The Texas GOP has adopted a platform calling for a public vote on secession.

Moscow must be happy.

Upon request by the United States Senate Select Committee on Intelligence (SSCI), NewKnowledge reviewed an expansive data set of social media posts and metadata provided toSSCI by Facebook, Twitter, and Alphabet, plus a set of related data from additional platforms.The data sets were provided by the three primary platforms to serve as evidence for aninvestigation into the Internet Research Agency (IRA) influence operations.

The Internet Research Agency has been implicated in the promotion of secessionist and insurrectionist movements in several countries; there is no sowing of division quite so pronounced as attempting to create a literal territorial split. In Europe, this took the form of involvement in Brexit and Catalonian independence efforts. In the United States, it was #Texit and #Calexit, as well as active support for the Bundy ranch and Malheur Reserve standoffs.

The vote in favor of Brexit, which happened on June 23, 2016, was subsequently used by the IRA to promote its Texas Secession initiatives. Brexit narratives were shared on the Instagram account @rebeltexas as a justification for #Texit, as well as on @_americafirst_and @mericanfury to encourage American isolationism and a retreat from involvement in global affairs. The Facebook Page Heart of Texas posted about secession with some regularity, and coordinated real-world pro-secession demonstrations across the state using Facebook Events. 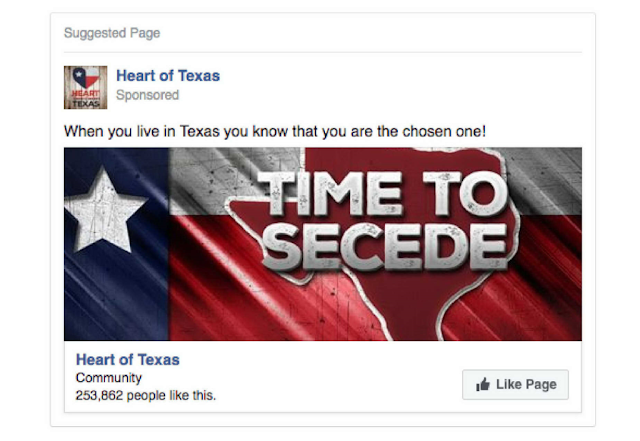